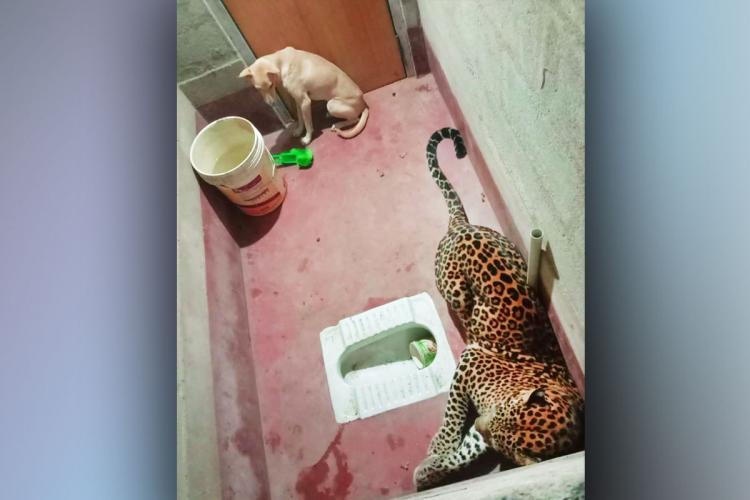 After a stray dog got trapped in a residential toilet with a a leopard for several hours, no one thought the pup would survive. But after nearly seven hours, the dog beta all the odds and miraculously get out in one piece.
Apparently, the dog who use to live on the streets of the Bilinele village in Karnataka, India got chased by a hungry leopard. Scared, the dog named Bollu by locals, sought for refugee inside of a house, but the wild cat followed him and they both ended up in the bathroom. The house owner spotted the leopard entering inside his bathroom and blocked the door.

This photo was taken from outside through a gap in the window. It is a leopard and a dog stuck together since this morning inside the toilet of a house in Kadaba, Dakshina Kannada district. I am told the leopard escaped at 2 pm and the dog is alive! pic.twitter.com/hgjJhaXW03

People called for the forestry department and after a couple of hours a team arrived at the scene. They initially decided to remove a part of the roof in order to set up a camera to see what they had to deal with. Surprisingly, when they got first images both the dog and the leopard were peacefully sitting in opposite corners, just like they’ve made a truce.
⏩

Sharing a video I received from the spot. After the leopard and dog were spotted inside the toilet in the morning, curious passers-by joined forest department officials to figure out how to catch the leopard and release it to the forest. pic.twitter.com/9dLzlxTUOO

After a few attempts, the rescue team eventually set the leopard free and it rushed into the woods. Then they got Bollu out who surprisingly was without a single scratch. Everyone was happy to see both the dog and the wild beast were set free with no harms. However, they were all wondering how something like this was possible.

who is now posing for photos. pic.twitter.com/LKy0s4viNx

“Many are wondering why the leopard did not attack the dog,” journalist Prajwal Manipal wrote on Twitter. “Raghavendra, forest officer in Subramanya, says leopards prefer to attack in stealth but here, it may have been wary of the dog defending itself and the lack of a clear escape route.”
Source


Continue Reading "Dog miraculously survived after getting stuck in a bathroom with a leopard for 7 hours" on the next page To See More!