A disabled dog in diapers is left on the street, adopted, and lives his dream life 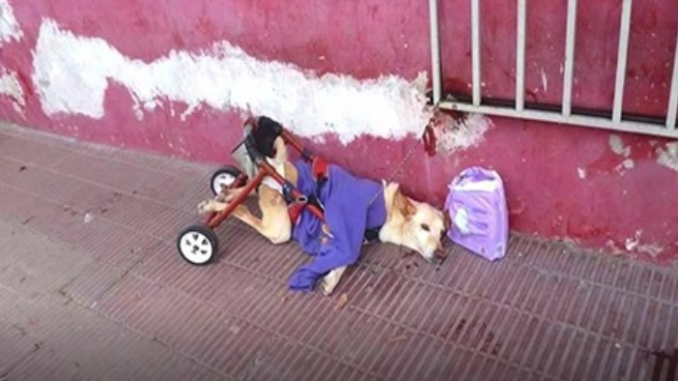 A beautiful dog was neglected and left behind. Lunita was left to fend for herself with her disability in Salta, Argentina. She didn’t have a good life, but she was given a second chance when a rescue organization found her and rescued her from the streets.
She was found tied to a railing near a grooming store. Her legs lay limp on the ground behind her, secured in a wheelchair.
Someone left a note with her. It included her name, how old she was and why she was abandoned.
Lunita was not left with food or water. Luckily for her, one of the employees who worked at the store found her and was able to inform the rescue organization called LUBA Salta. Two volunteers were eventually on their way to find her.
They posted her information online, but they didn’t have much hope that they would find her a long-term home.
Until, finally, a family did take an interest in her.
They were from the United States and needed a little financial help to have her transferred from Argentina, so they started a fundraiser. As a result, they were able to get her to the United States. However, after she arrived there, not everything went as planned.
The new owners didn’t really know how to take care of Lunita and her disability. She soon suffered from mite infestations, which developed into a serious staph infection.
She was taken away from the family and given to another family. Because of the infection and scabies, Lunita lost a lot of fur from her waist down to her tail. She also suffered from a bad urinary tract infection that caused her severe pain.
Every time her caretakers wiped and cleaned her rear end, she would start screaming and whining.
It took a lot of work, effort and medical care to treat Lunita’s illnesses. After a while, however, she recovered.
Lunita was happy with her new family and her adventures. She saw snow for the first time. She made new friends, traveled a bit, and even had birthday parties.
However, after she celebrated her 11th birthday, she got sick. She was admitted to the intensive care unit, where she eventually died.
At that time, she was surrounded by nothing but love.
Her advanced age and past ailments led to her death. It may not have always been easy for her at first, but during her final days she was certainly a very happy and loved dog.
Lunita was given a second chance in life. Would you ever adopt a dog that was abandoned on the streets? Let us know in the comments. Don’t forget to share this story with another dog lover. For sure he will be touched by it too.
Next article Next Post
Previous article Previous Post